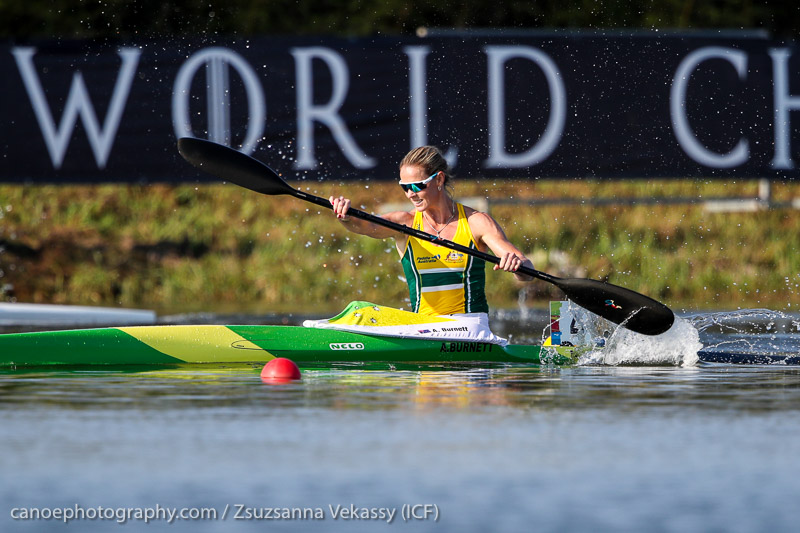 Olympian Alyce Burnett (Sunshine Coast Paddlesports Club) has kicked-off the inaugural 2018 Canoe Sprint Super Cup in style, winning a bronze medal in the women’s K1 at the pre-event, the canoe sprint Pre Super Cup, in Linyi, China. The competition continues this weekend with the main event in Russia. It was an emotional day for Alyce Burnett, who dedicated her racing and her bronze medal to her aunt, who had died in a car accident the day before.
“The whole day was quite emotional for me. My Aunty lost her life in a car accident the day before the race so I was out there racing for her. She always followed my races and hopped up at ungodly hours to follow the live stream. And being on that podium, next to two of the worlds best, was an amazing feeling, and one I know she would be proud of,” an emotional Burnett said after racing.
The 2017 World Champion in the K1 1000 is Australia’s sole representative at this new invitational event that consists of a Canoe Sprint Pre Super Cup which was held in Linyi, China on Tuesday (18 September) and the Canoe Sprint Super Cup to take place in Barnaul, Russia tomorrow, Friday and Saturday (21-22 September 2018).
The new event brings together the top local and international canoe sprint paddlers, World Champions and Olympic Champions, to compete across non-conventional distances for prize money, making for some fierce racing just three weeks after the Canoe Sprint World Championships.
In China, a host of Olympic and world championship medallists lined-up in the unique event, featuring races over 350 metres with the best 200 metre paddlers on the planet racing against the best 500 and 1000 metre canoeists.
“Racing over unconventional distances is always exciting, there’s no doubt about it. But this new event adds a whole new level to exciting. Being just after worlds everyone is still super fit, but no one knows what to expect with these distances,” Burnett said about the new event format.
“Plus the progression system was different to normal, so we were kept on our toes throughout. Having prize money up for grabs also added that extra bit of incentive, with everyone racing to the line.”
“We were invited based on our recent results at the World Cups and other international events. The nine girls here are the best of the best. A couple of the notable names are missing like Olympic champion Lisa Carrington (NZL), but even without them the competition is fierce,” Burnett added about the competition at the invitational event. The Sunshine Coaster finished on the podium in third place with Olympian and 2017 K2 500 World Champion and 2018 silver medallist Caitlin Ryan (NZL) winning the event and Belarus’s Volha Khudzenka, an Olympic medallist and 2017 K1 500 world champion, finishing second over the unusual distance of 600m.
Competing on the river in downtown Linyi suited the Burnett well, despite having to deal with some major equipment issues during the day of racing as she explained,
“My rudder broke at the end of my heat and we only had 50 minutes between the heat and the semi. After realising it couldn’t be fixed quickly, I sourced a new one from a Chinese competitor and hopped on the water for the semi with only ten minutes until the start. Not the ideal prep or warm up, but it seemed to work.”
“Then in the final Caitlin and Volha took off through the middle but I was able to hold off the Russian in the last 100m. With the regatta course being on the side of a harbour, the conditions were bumpy and windy which suited my surf background perfectly!” The event attracted big crowds in Linyi with the paddlers treated like super stars.
“The welcoming we got in China was amazing. People were taking photos on every corner wanting to know about us and our results. It was something we don’t normally get to experience at home.”
From China the athletes continued on to Barnaul in Siberia, Russia to challenge themselves against the best of the best at the Sprint Super Cup with racing starting tomorrow, Friday.
In Russia, the event will be different again including mixed K2 racing over 100m as well as K1 racing over 350m
“First we will be racing in mixed K2 100m races, which I can’t wait for! It’s always fun paddling with a guy! Then we’ll be racing in the K1 350, with only four people per race. 350m is a little shorter than I’d prefer but the heat, quarter, semi and final are all being run in one day, so hopefully the further through I progress the stronger I get,” Burnett said.
Event webpage: https://www.canoeicf.com/canoe-sprint-other/barnaul-2018
About the ICF Canoe Sprint Super Cup
The new ICF Canoe Sprint Super Cup features record prize money and some of the biggest name in the sport as it looks to take the Olympic discipline to new audiences and continue its growth around the world.
It has attracted major sponsors, live television coverage, and the enthusiastic support of the paddling community with top local and international athletes competing across non-conventional distances for prize money.
At the Pre Super Cup in Linyi, Shandong Province, China, Athletes raced 600m with prize money for the top six athletes, the winner taking home ‎€4,000. In total ‎€50,000 was on offer at this competition. Races were conducted for men’s and women’s C1 and K1 on the river in downtown Linyi with the finals shown live on TV in China.
For the Super Cup at the Kostenko Sports School in Barnaul, Altai Region, Russia, 12 leading Russian and international athletes will battle it out over 350m in men’s and women’s canoe and kayak for the grand prize of €8,000. The top six athletes in each event will all take home prize money, with a total of €120,000 awarded across the competition.
In a unique feature event, male and female athletes will be randomly paired to race in mixed C2 and K2 boats over the ultra short distance of 100m.
Each event will feature four tough rounds of heats, quarter finals, semi finals, and A and B finals.
Athletes were invited based on recent international results in the following competitions:

In addition two athletes in each category were given wildcards and a further two were selected by the host organising committee.
The finals will be broadcast live on multiple channels including Eurosport and Match TV.

For original article from Paddle Australia: http://paddle.org.au/2018/09/20/inaugural-canoe-sprint-super-cup/
© This article was originally published by Paddle Australia.