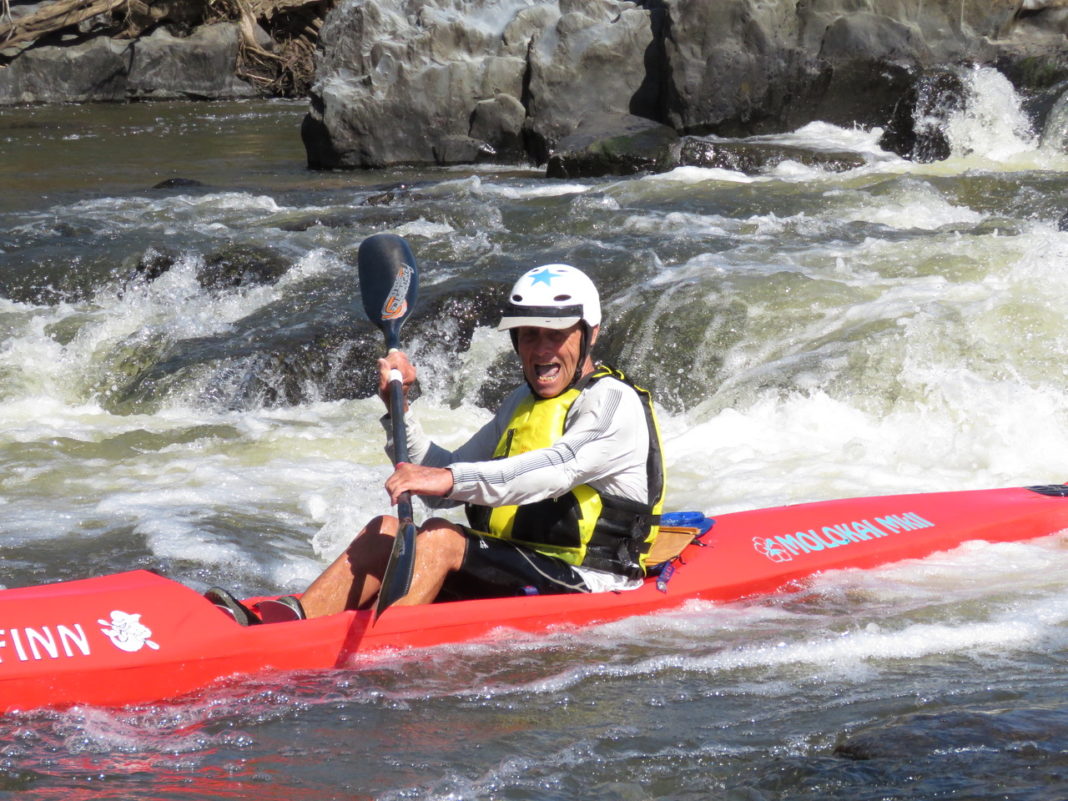 The Barron River Challenge split race format produced a moderate field of paddlers, many of who have made this down river race an annual pilgrimage. Whilst the 20 km Day 1 section has less than half dozen sections where the water becomes aerated, its pictureous twists and overhangs call for regular rudder and sweep strokes to maintain a swift pace.
The BRC12 Junior race saw Finn Weaver collect his 3rd consecutive crown in his Nelo K1. He continued unofficially down the entire 20km course with second place getter Liam Newlands who was paddling a plastic Spirit ski.
The BRC20 was introduced last year to compliment our new split format. Gregory River Marathon Champion Steve Jenje pushed 2017 winner John Westcott into 2nd place with a commanding sub 2 hour effort.
Donna McCormack won the female BRC20 race after a very successful campaign at the Gregory last weekend. The TK1’s are quite suited to the Mareeba to Bilwon section. We saw accomplished Brisbane paddler Jeff Stewart winning that division from Townsvilles’ George Alford.
The water level in the lower 30km was a challengingly low for the TC2 class resulting in only one brave couple tackling the course this year. Chris Cunningham and Claire Linklater like the race format and are confident they will be back in 2019. Likewise only one determined short plastic Paddler took on the BRC30. Bernadette Tooman now has her name in the record books.
The Day 2 start line saw last years winner Geoff Pearce (Sunshine Coast) with a 3 minute lead over David Smith (Sunshine Coast) with Mareeba’s John van Ryt a further 13 seconds behind. Local Rhet Rutherford had paddled his Velox Fuse quietly into 4th position only 7 minutes behind his mentor JVR after 22km. The practically indestructible long plastics were all within striking range with Gary Hume, Ben Sellars and David Bellamy within 15 minutes of the composite K1’s. Sweeps were pleased to see Jason Hedges start off fresh after his hugh effort on Day one assisting a fellow paddler with major rudder problems.
With a 1.36m river height at Bilwon and a Myola level of 0.49m the race wasn’t going to break any records however there was enough water to avoid portaging if you nailed the lines down the dozen or so significant rapids.
David Smith was the first casualty with the transition from Long Plastic in previous years to K1 proving too big a leap at this water level. His Kawana team mate – David Bellamy was the big mover on the day getting into 4th place outright and winning the Long plastics category.
Ben Sellars fell victim to the Oak Forest rapid with a paddle mishap putting him out of contention. Rhet Rutherford was the first of the 4 K1’s to slice unscathed down “Oak” which set him up for his first podium finish in only his second full race.
Jamie Gardiner nursed her Talon K1 to finish in a respectable time and claimed her third “Barroness” title.
Race organisers were complimented on their astute calculation of the starting waves on day 2 which saw South Australian -Brad Butler cross the finish line first and to then have the opportunity to compliment the field of finishes.
As Phil Arnold smiled his way to Kuranda Beach to complete his 4th BRC50, “Ireland” rapid – a little over one km from the finish, was about to determine the order on the podium.
Geoff’s plan was to keep his 3 minute buffer, however, the last tricky rapid on the Barron caused a four minute swim, allowing John van Ryt to snatch a 58 sec victory from last years winner. John van Ryt has paddled in all 8  BRC50’s and has been crowned “Barron” on 3 occasions. John has the fastest solo time set in 2014 at 3:55:38 which narrowly beat Matt Blundell’s 2012 time of 3:57:53.
Matt Flower and Josh Roy hold the outright record of 3:55:23 set  in a TK2 Plastic Spirit ski in 2014.
Well done to the Tinaroo Canoe Club and their Organising Committee for another outstanding event!
For full results click here.