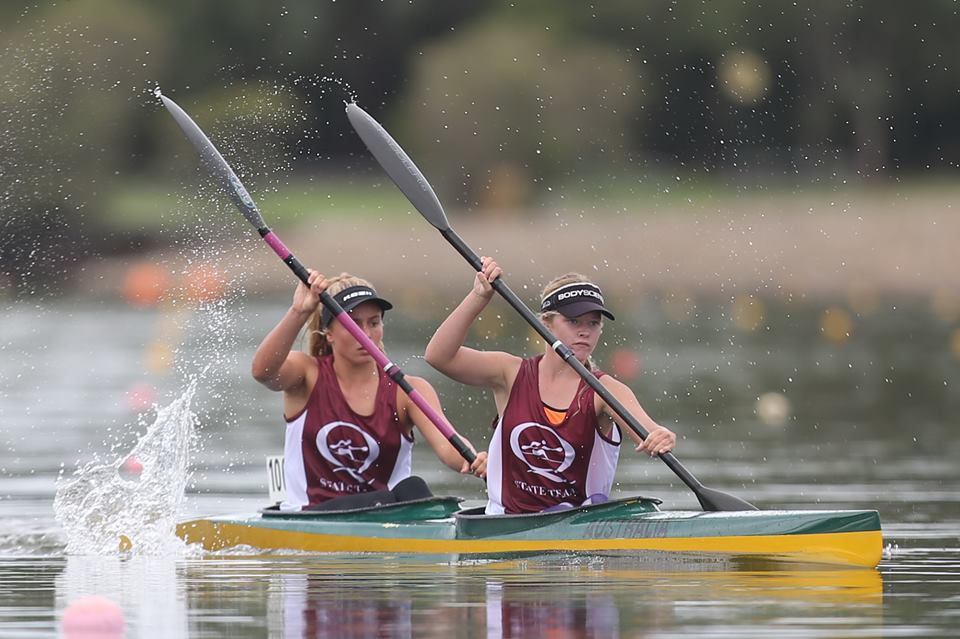 Nothing could dampen the enthusiasm of Queensland junior kayakers & canoeist at the 2017 Canoe Sprint National Championships. The wind came up every day at mid-morning, some days it was rainy and cold and the athletes rugged themselves up with hoodies and jackets, but they remained highly motivated and focused on their goals.

Tom Green, Lucinda Kelly, MacKenzie Duffy and Tiarnee Massie achieved outstanding results in the U18 age category and were successful in making the 2017 National Junior Canoe Sprint Team. Other competitors in the U18 age group included Sophie Butler, Erin Blanch, James Shingles, Daniel Mole, Jonathon Gray, Lauren Peters, Gabrielle Parker, Isabella Gill, Rielly Bryant and Aiden Thompson some of whom made A finals and came home with medals. Erin Blanch and Lucinda Kelly proved to be a powerful combination in the K2 events. In the U16 girl’s category Alicia Fay, Shannay Butler, Jenaya Massie, Ella Maclachlan, Anthea Warne, Sophie Rixon, Phoebe Wills Grace, Sarah Gray and Erynn Peters represented Queensland proudly with Alicia Fay and Anthea Warne gaining some impressive results and proving they were a force to be reckoned with during the entire regatta. In the U16 boys Queensland was represented by Jamie Cox, Liam Warriner, Carter Brodhurst-Hill and Lachlan Bancroft. Carter and Lachlan teamed up in the K2 to bring home a swag of medals. Ben Manning also performed admirably winning all distances in the 18 Men C1.  Ben was very competitive challenging and in some cases beating some of the open c boat athletes.

Mia Jeffries from Sunshine Coast Paddlesports Club was Queensland’s youngest competitor and competed in the U/12 category. She showed a steely determination when she teamed up with Currumbin’s Ava Lund in the 2500m to bring home a silver medal. Currumbin competitors Chaise Richardson, Zali Carroll, Natalee Rixon and Ava Lund dominated the individual U14 girl’s category making a clean sweep of medals in all three distances, Chaise won all U14 individual events. Nadia Ingerman and Emelia Green from Wynnum Redlands also showed their strength in the team events coming home with several medals in the k2 category. Daniel Hardwick competed in his first National Championships in the U14 boy’s events and earnt himself a place on the podium on numerous occasions.

The RAJ award was awarded to Jamie Cox from Currumbin Creek Paddlers Club. The Raj Award was named after a HMT safety boat (Cabin Cruiser) that was owned and operated by Gerry Brayne, ICF Official. The boat was used for 10 years on the Red Cross Murray Marathon Canoe race, for the safety of all canoeists. It carried radio communications and Red Cross first aid. Jamie received this award because he turned back while he was paddling the boy’s U16 K1 2500 to assist a paddler who had capsized. Officials found that Jamie was helpful as a boat holder, had a great attitude and that he was respectful to officials and fellow competitors. Jamie stated “I was really surprised that I was nominated and very excited when I was given such a prestigious award.”

In conclusion Queensland clubs had a very successful 2017 National Sprint Championship and represented their state, proudly demonstrating a high level of motivation and enthusiasm throughout the regatta.

Thanks to contributors Sharon Kyme, Kerry-Ann Cox and Matt Ingerman.

Also thanks to Photos in a Flash for additional photos.