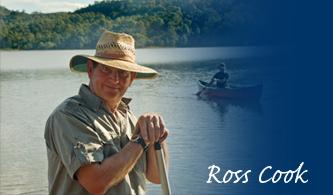 It’s a sad day; after 47 years of designing and building canoes and kayaks, Ross Cook has finally decided to fully retire, call it day and close down.

Ross Cook was only 10 years of age when he built his first canoe in 1955.  Inspired by old books of beautiful canoes in spectacular settings he hand built a wood & canvas canoe and joined the Indooroopilly Canoe Club.

In the mid 60’s Ross began his apprenticeship in fibreglassing and continued to develop his paddling skills.  And in 1968 he designed & built his now famous 16ft canoe from home, it was an immediate success and the orders started to flow.

In 1970, Ross established Rosco Canoes Pty Ltd.  Over the following years new models were added to the fleet as canoeing & kayaking grew in popularity.  In 1978 they were awarded the Australian Design Award for their entire fleet (5 models) a truly amazing achievement.

Throughout the 1980’s the industry started to broaden its appeal and commercial tour operators appeared on the scene.  Rosco became the chosen brand and were asked to develop a line of expedition sea kayaks & large canoes.  Both their single & double expeditions became extremely popular and their newly designed 20ft canoe (still Australia’s largest) was used for many applications across Australia.

It was however the quality of their products that always set the Rosco craft apart.

Over the past 40 years Ross Cook has paddled throughout Australia, New Zealand and the North West Territories of Canada.  He was an accredited senior instructor with Australian Canoeing and is still heavily involved and respected within the local paddling scene.

We would like to wish Rosco all the best in his retirement and hope he continues to paddle for many years to come.