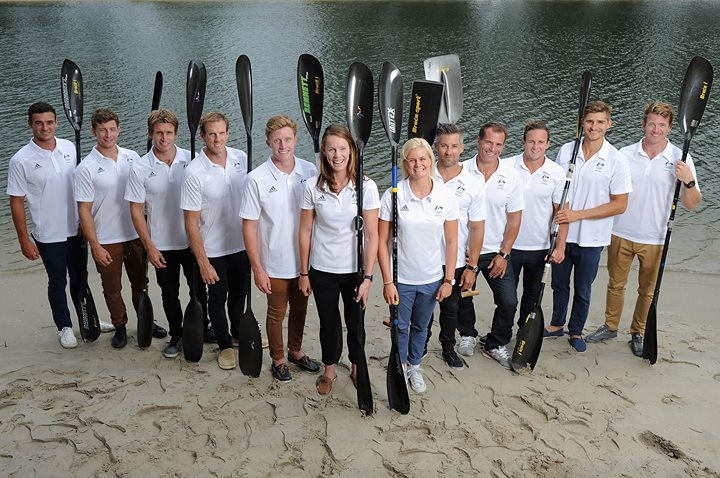 CANOE/KAYAK: The 12 paddlers named on the 2016 Australian Olympic Team on the Gold Coast today have the depth to produce more Olympic medals in Rio than any previous Australian Team.

Following the two selection trials over the Australian summer, the athletes nominated by Australian Canoeing and selected by the Australian Olympic Committee are a mixture of Olympic champions, medallist veterans and half are exciting Olympic debutants.

Seven kayak men – Daniel Bowker, Jacob Clear, Riley Fitzsimmons, Murray Stewart, Lachlan Tame, Kenny Wallace and Jordan Wood – have been named across the K4, K2 and K1 1000m events. Combinations will be tested at training camps and World Cup races over the coming months. The final combinations are sure to provide formidable opposition to the rest of the world.

Australia won gold in the K4 1000m at London 2012 and two of those champions – Murray Stewart and Jacob Clear – have been selected for Rio 2016. The third Games for Clear and second for Stewart.

“I’m really excited about what this K4 boat can do,” Stewart said after the Trials. “There is still a bit to go but we are going to keep going up from here.”

Kenny Wallace, who won K1 gold (500m) and bronze (1000m) at the Beijing Olympics and K2 1000m 4th in London has also been named after demonstrating the best form of his career.

“Making the Olympic Team is the hard bit,” Wallace said after the Trials. “Because once you are at the Games you have left no stone unturned, you’ve done the training and you can just go your hardest.

“It’s great to have such a strong team with the young guys coming through keeping us older guys on our toes.”

Wallace and Olympic debutant Lachlan Tame have won silver the in the K2 1000m at the past two World Championships and they joined Stewart and Clear to win the K4 selection trials.

Tame, like many of the athletes, comes from a surf lifesaving background. As a national surf champion, he was dared by a mate to try to make the Olympics after London 2012 and he has achieved that with in a 1000m squad that is stronger than ever.

“I was contacted by some competitors from overseas who said ‘congratulations you’ve just made the hardest Olympic Games team in the world’,” Tame said.

Riley Fitzsimmons and Jordan Wood are the under-23 K2 1000m World Champions and pushing the older guys every step of the way. Wood is continuing the family tradition of champion paddling. His late father Steve Wood was in the K4 team that won bronze at Barcelona 1992 and his mother Anna won bronze in the K2 500m at Atlanta 1996 and placed sixth at Sydney 2000.

Daniel Bowker has been trying longer than any of these athletes to make a senior Australia Team and he is now on the Olympic Team.

“It’s exciting and a big relief,” Bowker said. “It’s been eight plus years of work that has led to this. I moved interstate back in 2013 to be surrounded by the best squad in Australia and try to get Olympic selection.

“Personally, it’s awesome to be selected for my first Olympic Team but the job’s only half done. I’m putting my best foot forward to make sure I win another gold with these guys.”

West Australian Stephen Bird has made his second Olympic Team. After placing sixth in the K2 at the London 2012 Games he will focus on the K1 at the Lagoa Rodrigo de Freitas venue in downtown Rio de Janeiro.

Sunshine Coast pair Alyssa Bull and Alyce Burnett will make their Olympic debuts in the K2 500m event after winning both selection events against London Olympians Naomi Flood and Jo Brigden-Jones **. The under-23 World Championship bronze medallists, who both first paddled as surf lifesavers, have been training and studying on the Gold Coast in the lead up to Rio 2016.

“Being on the Olympic Team definitely hasn’t sunk in yet but with the announcement today Rio is starting to feel closer,” Burnett said.

“Alyssa and I are great friends and we have made training fun while working really hard. We train out of the same base as the boys and it is great to be around that winning culture.

“We are only a really steep improvement curve and with 22 weeks until the Games you never know what could happen. We set one of the fastest times in Australia to win the trials so it will be good to get to the World Cups and see how we are going against the other teams ahead of Rio.”

Burnett lives with Wood and is coached by his dual Olympian Mum Anna, so it is a close knit kayaking community.

London 2012 Olympians Naomi Flood and Jo Brigden-Jones remain in contention for the third and final women’s spot on the Team. The duo will compete at the World Cup event in Duisburg in May with the athlete with the best result getting the chance to compete at their second Games.

In the canoe events veterans, Martin Marinov and Ferenc Szekszardi have capitalised on the opportunity to claim the C2 1000m spot.

For 49-year-old Marinov, this will, in fact, be his fifth Games as an athlete. The three-time bronze medallist from 1988 and 1992 first raced for Australia at the Athens Olympics. He only decided to really go for Rio 2016 a few months ago.

“I said if these young guys can’t beat a 50-year-old man then they’re not good enough to go to the Olympics.”

With the depth in Australian kayaking never being stronger plenty of Olympic and World Championship medallist experience across the board the prospects of success in the Olympic regatta have never been stronger.